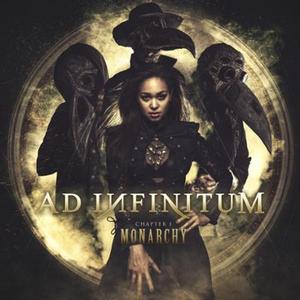 Vocalist Melissa Bonny has been gaining momentum for herself in different bands within the last decade (Rage of Light, Evermore) and live performances, and Ad Infinitum allows her to showcase the range that she has established up to this point. Chapter 1: Monarchy has many different shades to it, and all of them showcase a strong potential for the future.

As already noted, the strongest selling point of Monarchy is that of its sheer diversity. There’s some heavier moments, such as “Maleficent,” where Bonny can showcase her powerful screams alongside some grandiose synths, and the energetic yet catchy “Demons,” with a galloping chorus that shifts gears to near melodeath levels. But there’s also some more upbeat and bombastic tracks, such as the genuinely soaring “Live Before You Die,” and the fist-shaking energy of the thunderous “I am the Storm.” Things turn to the softer and gentler with the more introspective closing number “Tell Me Why,” and the slow-burning epic “Fire and Ice.” But the album’s finest moment is that of the anti-ballad “See You in Hell.” Wrapping in a bit of fairytale whimsy with a genuinely dark take on a melodic track gives it some gleefully sinister vibes (with perfectly fitting guitar tones as well) that allow it to stand out from other tracks in this style.

With all of the diversity present, the symphonic elements are what tie things together nicely. There’s a sprawling, cinematic quality to the tracks that makes them more cohesive and flowing. On top of that are Bonny’s vocals, which echo the sentiment of the tracks, be it a snarling energy to some heavier moments or a tender touch to a quiet atmosphere. All in all, Monarchy, as the Chapter 1 implies, is simply the beginning for Ad Infinitum. Those seeking something within the symphonic metal realm that is willing to give it a breath of fresh air should be immediately taken by what is being accomplished here. This has all the makings of a bright future. 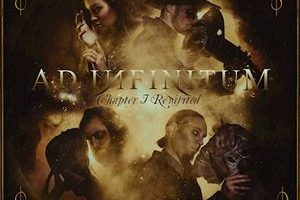