Ad Hominem – Napalm for All (Osmose) 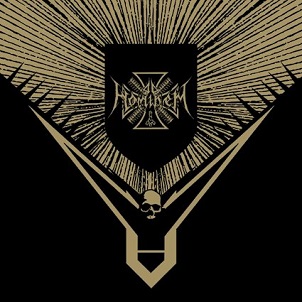 Rumblings of fascism within Ad Hominem’s lyrics have existed for quite some time now, but that’s what you get when your lyrics tread the delicate line between individualism and political matters. Nevertheless (and, really, who wants to garble up time by waxing on politics? Eh…) the Italy-by-way-of-France troupe was last heard from via 2015’s Antitheist, an album equally known for its religious text-burning cover art and its vitriolic, rocked-out take on black metal. And that’s where Napalm for All picks up from — it’s surly, scathing and unrelenting. Not necessarily in that order.

Indeed the “rock” is still here, meaning, black ‘n roll is in long supply, featuring these down-stroked, punk-infused riffs in 4/4, with the necessary swing. Main and lone dude Kaiser Wodhanaz has it virtually down-pat, side-skirting the issues Darkthrone and Satyricon ran into with the death ‘n roll formula by heightening the dynamics and better yet, the recklessness. Look no further than the back-to-back pummeling of future chart-topper “Goatfucker” and “V. Is the Law”, the latter a chest-out, knives-out (even) diabolical thrust into the gut of BM. And don’t twist song titles like “I Am Love” and “You Are My Slut” — both are sauntering and somewhat demented, again, bringing in the often-unforeseen punk element into black metal.

Ad Hominem can get some knickers in a twist just by showing up, apparently, but Napalm for All never bites off more than it can chew. The attitude here may take everything out in its wake, but its nihilistic core reeks of a band that is fueled by hatred.