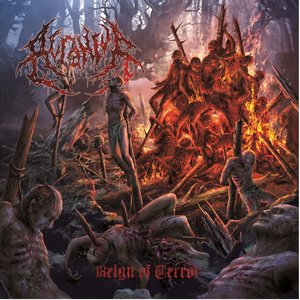 Effectively blurring the line between deathcore and slamming death metal is the German act Acranius, who have been pushing their particular brand of brutality over the course of two previous albums to this point. Suffice to say, you’ll find plenty of groove and slams over the course of a half hour of Reign of Terror.

The strong suit of Acranius is that of groove – thick, heavy and deafeningly oppressive groove. This becomes clear even before the first track/intro, “Born a King,” ends. There’s some breakdowns, which are significantly heavy, but feel more standard in comparison to the band’s ability to toss out the churning mid-tempo groove with a strikingly catchy feel. For better or worse, “Born a King” is the weakest track, so it’s far better to check out the stomp-friendly second one, “Kingmaker.” The groove is more defined here, with lumbering sections of gargantuan-sized riffing that you find sticking around on your brain, while they attempt melting it. “Return to Violence” continues the groove-friendly proceedings in a downright catchy manner. While there’s a clear pattern and formula to the way that Acranius operates, the short runtime makes the most of what it has to work with, with minimal feelings of deja-vu. The slam sections are integrated with some level of precision – never going for the cheap moments but giving them space and crafting material around it, even a few more technically-proficient components are used from time to time. A few of the breakdowns have a more generic, deathcore-ridden feel, but these are few and far between.

Death metal fans who are also groove-lovers will rejoice with Reign of Terror. While it may be a little one-note for some with the very groovy emphasis, it’s something that the band has a clear grasp of and use it for all its worth without cheapening it.