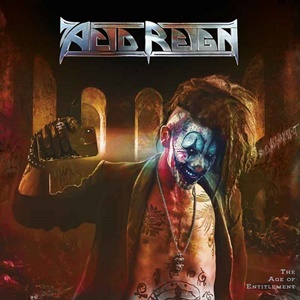 Avid thrash collectors probably remember this UK band on their initial run from 1985-1991 – releasing two albums on Under One Flag with The Fear and Obnoxious before breaking up. Resurrection occurred a few years back with some demo and single releases – setting the stage for the group’s third album, the poignant and current ‘hot button’ topic for The Age of Entitlement. Vocalist Howard Smith is the lone bridge between the old/new lineup, surrounding himself with a mix of younger players who understand what the band is all about – continuing the mix of fluid rhythms and stellar musicianship plus socially relevant lyrics and this gang-busters mentally to crush the listeners in a solid format.

It’s not hard to place where Howard’s melodies and deliveries come from – he takes on a Joey Belladonna-esque higher register persona, although very speedy to keep up with the tempos and rhythms rolling out of “Blood Makes Noise” and the head bashing blitzkrieg of maneuvers within “The New Low”. The wall of tight triplet runs and supplementary guitar melodies Paul Chanter and Cookey provide for “My Peace of Hell” puts them in revered status for their taste, tradeoffs, and craft – and you gotta love the Ramones nod with sneaking in the line ‘I Wanna Be Sedated’ during the verses. Adding in some surfer-like feel or punk-like aesthetics diversifies their relentless, go for broke attitude throughout this record – Acid Reign knows there are times where you just need that quick hitting number like “Ripped Apart” to scream along with and bounce around the walls. At the same time, the 8:19 “Within the Woods” conjures up a horror-filled landscape, the wind sound effects and narrative elements perfect for the maniacal, haunting lyrics and semi-progressive/harmonic-laden instrumental sequences. While many thrash bands took Exodus, Slayer, and Testament as their reference points, Acid Reign instead gravitated more to Anthrax and Heathen for their musical heroes – and as such it gives them more of their own legs to stand on.

We all know it’s up for debate whether these 80’s artists are putting out their best work after being away for decades. In the case of The Age of Entitlement, it’s hard to argue about the intensity, solid musicianship, and catchy as hell melodies/hooks Acid Reign deliver on this material.