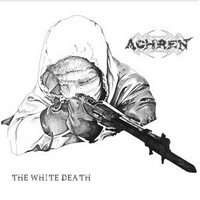 The White Death is like one those over-the-roof expensive chocolates, small in size but packs a ten-fold punch of flavor. The musical value barely makes up for the short length, if anything it’s kind of a pisser because the fifteen minutes comes to an end too quickly. It’s the album everyone is saying leaves a hunger for more.

Scottish “blood metallers” Achren have a solid thrashy death metal style clad with mad riffs of musical warfare. The overall mood of the album is peculiar because it aims to render as violent and dark yet it spurts out blithe and high-spirited energies, it’s like going to war wearing the brightest smile all the way.

There’s a lot put into the three songs that make up The White Death. Sometimes these super short EP’s are top-notch work, other times they’re duds. When an album has only three songs and runs barely over fifteen minutes like The White Death, we expect quite a lot out of every second of each song. No worries, Achren gave us more than we bargained for and every song gets even better than the last. “Archangel” immediately introduces their high friction energetic power and still the two following songs strike harder with their catchy characters. “Suomen Susi” is the mellowest and slowest song of the three and that’s saying a lot.

“The Eschatologist,” with low downbeat rhythms and bass-saturated tones, is like a sweet treat to us foot-stomping bass-lovers. The energy accelerates as the tempo picks up the pace and charges into a guitar solo along with the wickedest lyrical stanza on the record. The vocals, by the way, with those good tones and awesome lyrics, are one of Achren’s strongest attributes. Listen carefully to the surprisingly well enunciated words: “Let us walk unto the precipice; I release you into your death.” Sounds tempting for such an uninviting invitation, doesn’t it? The crudely growled, semi-melodic, scolding, scratchy vocals are almost too alluring. Usually I prefer prose-poetry type lyrics with little repetition and little or no melodies but a good melody with captivating, catchy lyrical verses upon a skillful beat can be quite attention-grabbing and admirable when a musician creates a striking hit. Indeed, “The Eschatologist” took this writer away. It is the crème de la crème, the life-source and end of The White Death.

It’s musically, lyrically and visually artistic how Achren take the concept of death to a more engaging, inciting and provocative perspective with The White Death.