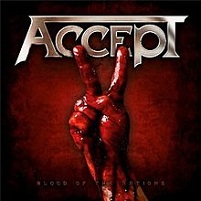 Let’s be honest – when you decide to replace a well known vocalist such as Udo Dirkschneider, the public and critical knives will be sharp and ready to strike if anything less comes out from a classic act such as Germany’s Accept. Most still haven’t forgiven David Reece’s time during 1989’s Eat the Heat album, and while Udo’s subsequent return on 1993’s Objection Overruledwas a step in the right direction, future follow-ups didn’t rekindle the spark of the early 80s.

Accept may be best known for their double bass speed metal monster “Fast As a Shark” as well as their mid-tempo, fist pumping anthem of fame “Balls to the Wall”- two of many songs that are mainstays in live sets. So factor in a new American vocalist with Mark Tornillo of TT Quick lineage and we can either have the band we’ve always wanted to lead the pack or once again watch an act fade away to oblivion.

Blood of the Nations lives up to all the buzz it’s receiving, especially with the “Teutonic Terror” video and “The Abyss” internet sample that recalls the glory years of Breaker through Balls to the Wall. The title track is another crowd pleasing mid-tempo anthem, the band living large with the infectious chorus and Wolf Hoffman’s unmistakable axe tone.

Other notable songs to sink your teeth into include “Pandemic” that could be a long lost Restless and Wild extra and “Bucketful of Hate” where Mark roars through his melodies much like a montage of Udo meets Rob Halford. Andy Sneap keeps the sound sharp and as live as possible, proving that Accept 2010 doesn’t have to be merely stuck in the past. Given the impact acts like Enforcer and Grand Magus are starting to make on the worldwide traditional scene, I think Accept have a great platform to prove this style will never die.