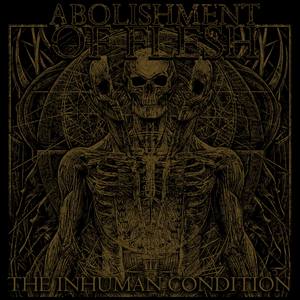 Phew, sometimes all it takes is a strong opening that knocks one backwards to convince the audience that the rest of the music is worth listening to. Abolishment of Flesh’s debut was ten years in the making, but the second that it starts with the pummeling blasts and riffs of “Inhuman Anatomy,” you are going to be a full attention. Of course, death metal is supposed to be brutality-forward, but many modern acts end up focusing on style over substance. This can’t be said for Abolishment of Flesh.

While the ‘it sounds like death metal’ argument isn’t one that will be won by anyone trying to convince someone to check out The Inhuman Condition, that’s not to say it’s uninspired. The deadly intensity that tends to go from the beginning of each track to the very last note would certainly stand up and say otherwise. Particularly when this is a mostly one-man act of Ramon Cazares – it’s clear he knows what works for death metal and attempt to ramp up the brutality at any given moment in time. It’s hard to discuss anything about the album without first going to the downright aggressive nature of it (though there is a bit of melody lying below the surface, particularly in the leads). The type of thing that the more modern flavors of the genre have forgotten. There’s nothing like a good beating when it comes to death metal, and those in need of something on the lines of Suffocation or Kataklysm (hopped up on adrenaline) are sure to become familiar with this. The quasi-technical riffing structures, the visceral energy – it’s hard to put down a track like “Servitude of Endless Suffering” when it’s simply so well done for the style.

A massive helping of death metal adrenaline, The Inhuman Condition may not push the genre forward but it’s quite well done. An all-out ball of musical destruction, it grooves, blasts, and shreds its way through over 45-minutes of carnage with minimal listener fatigue.