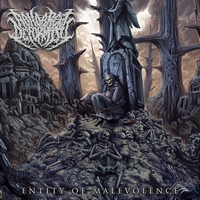 Not to be confused with Abhorrent Decimation, who recently released the excellent Miasmic Mutation, Abhorrent Deformity offer up bone-splitting brutality of a more slamming form. Bringing death metal from North Carolina, and composed of ex-members of Lorelei and Labyrinthe, Abhorrent Deformity deliver brutal death metal that fans of Disgorge, Defeated Sanity, or Devourment (lots ‘o D’s) should be able to easily enjoy.

Expect nothing less than an all-out assault of brutal death metal when you begin to hear Entity of Malevolence. The songs tend to hang around the three minute mark and keep things to the point. Thick and heavy riffs permeate the landscape, often accompanied by blistering speed with the occasional ‘slam’ sections reducing things to a crawl to emphasize their appearance. “Manifested Filth” is a good example of this, with many sections of blasting, rapid-fire riffing, and low gurgles switching over to chugging at the drop of a hat, though never sounding forced or cliché. In fact, their ability to transition well keeps this one far away from the bargain bin (of which many ‘slam bands’ tend to lean into).

While there’s nothing particularly innovative about what they do, they do it with enough finesse that it should keep you intrigued after a few listens. Being competent about transitioning is always a key with this style and Abhorrent Deformity have a down to a science. Entity of Malevolence rips, slams, and blasts with the best of them, and is sure to keep fans of brutality satiated.