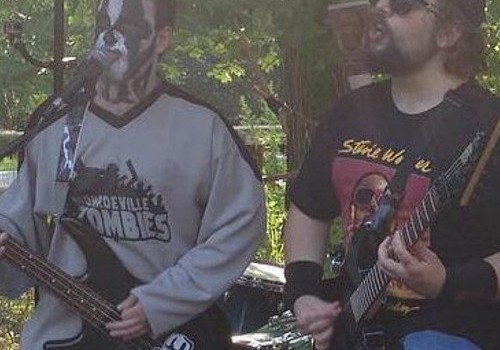 We are stoked to be exclusively streaming “Stick ‘Em,” a song from Zamboni’s forthcoming self-titled album.

As so described as “the worst band ever to attempt any form of music,” the Brooklyn, NY/Wantage NJ crossover two-piece features the bombastic bass and booming vocals of Chris Butera and the Ramones-esque buzzsaw riffing guitars of Robert Orr. Zamboni initially began life in the ashes of Butera’s former thrash metal band Obliterator, whom Orr once saw open for Hexen, Mantic Ritual and Rattlehead at The Meatlocker in Montclair, NJ. Butera had a vision for something “so stupid and offensive it had to work.”

Due to the band’s longstanding drummer dilemmas, Orr and Butera have decided to go the route of Agoraphobic Nosebleed and both record and play live with programmed drums – proving once and for all that no band is more awful than the dreaded Zamboni.

The band’s self-titled album can be purchased at this location.