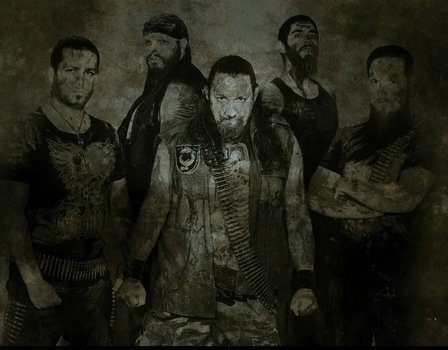 Are you a fan of outside the box metal? Something that isn’t content to play within the defined boundaries? If so, you are in luck, as we are premiering a new video from Israel’s Arallu for the song “Oiled Machine of Hate.” Taken from the recently released Six, available through Transcending Obsurity Records, you can stream the video below. If you like what you hear, you can also purchase Six at their Bandcamp site or by clicking on the widget below (and get to hear almost the entire album).

In taking an approach to black metal that sits on the thrashier side of the fence, Arallu further enhance their sound with traditional instrumentation and Middle Eastern melodies. “Oiled Machine of Hate” is a solid example of what the band can do, featuring fiery blastbeats and blackened riffs squaring off with engaging melodic flair and immediately hooky rhythms. Blackened rasps are the main dish, but later in the track some clean-ish vocals supplement and add to the eastern melodies without spoiling the process. It should be all the evidence on needs to merit a further investigation to the band’s unique sound. As for the video itself, it focuses on terror/bombing footage as a man frustratingly watches through his television, who reaches his boiling point by the end. An effective and intriguing tie-in to the band’s lyrical content.

Says the label:
ARALLU from Israel are imbibing their Middle-Eastern influences and channeling the same using the black metal template that they’ve been trying to perfect for over two decades. Not unlike their label mates in RUDRA, they’re forging a unique sound replete with traditional instruments like Saz and Darbuka, and exhibiting a penchant for the thrashy variant of the style. Faster, tighter and more potent than ever before, ‘Six’ bears the insignia of the band’s progress over the years and their culmination in a release that might change their fortunes finally.