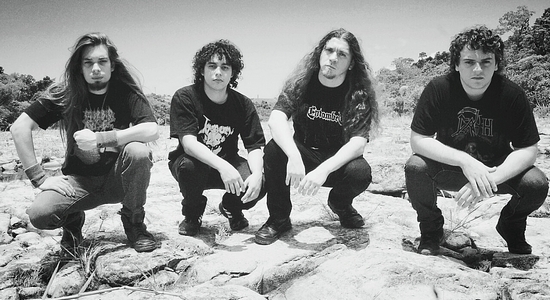 In anticipation of Verthebral’s upcoming debut full-length, Regeneration, we at DR have teamed up with Satanath Records to share a new track. “Old Man’s Memories” is the song in question, and Regeneration is set to be released on June 29, 2017 (via Satanath Records, co-releasing with More Hate Productions and Final Gate Records). As per the usual, if you enjoy what you hear, you can pre-order the album in both physical and digital format HERE or click the Bandcamp widget at the bottom of the page. There, you can also check out the track “Spirit in Solitude.”

For those unfamiliar with the Paraguay-based act, Verthebral fire up classic ’90s death metal done right. “Old Man’s Memories” has a tone that may cause you to think about acts like Deicide or Cannibal Corpse, yet doesn’t feel dated. A primal rage fuels the mostly mid-tempo track, with plenty of headbangable moments. A sly melody and solid leadwork (not to mention the pacing) ensures that it’s as memorable as it is heavy. There’s no tricks or hurdles to jump – this is no-frills material that knows what it is and exactly how to succeed with it.

About the band:
It’s not often you come across bands from Paraguay and if this is the first time you have, you are bound to get blown away. This is primal yet superbly channeled death metal music that hearkens back to the days of SARCOFAGO, MALEVOLENT CREATION, MASSACRA, KRISIUN, REBAELLIUN, ANGELCORPSE and VADER. It’s a combination of all of the above and sounds rather fresh in its output. There’s a South American charm to the proceedings but everything is meticulously planned and executed. The production is suitably raw but also very clear and impactful. I daresay VERTHEBRAL have released one of the most stunning albums in the style this year.

Regeneration Track list:
1. Apocalyptic Seasons (Intro)
2. Place Of Death
3. Spirit In Solitude
4. Regeneration
5. Beyond The Garden Of Creation
6. Without Any God
7. Old Man’s Memories
8. The Plague Of Insomnia
9. Immaterial Essence Of Things
10. Inside Of Me