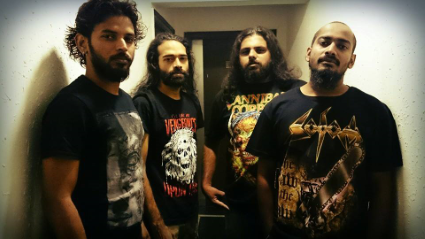 Those with a hankering for thrash metal with intensity to spare should be thrilled by our latest song premiere. This time we have the Indian act of Chaos premiering a new song from their upcoming sophomore release, All Against All. Due out on June 15th through Transcending Obscurity Records, “The Great Divide” opens the album and can be streamed below. If you like what you hear, as always, you can click on the Bandcamp widget to pre-order the album and check out the title track.

As a lead-off track, “The Great Divide” gives you a good idea of what to expect with the album. Blistering, riff-centered thrash that gets right to the point is the name of the game and “The Great Divide” is a 2-minute burst of frantic riffs and a few snarling grooves when they slow down for a second. Not to mention a zinger of a solo towards the finish. But with a quick runtime, there can be no moments waste, and here Chaos have effectively cut the fat down to a super concise ripper with near-surgical precision. A real adrenaline rush that’s bound to leave you wanting to hear more and rapidly hitting the repeat button several times.

Says the label:
Indian thrash metal titans CHAOS are back with their sophomore album titled ‘All Against All’. It’s one of the most anticipated albums in this region, and that’s not surprising considering what a rage their debut album ‘Violent Redemption’ was. Standards have been upped remarkably, with artwork being made by the talented Reuben Bhattacharya (Visual Amnesia) and better packaging this time around on digipak format as well as a limited edition hand-numbered gold-embossed box set. Like last time, the production is done by Keshav Dhar of SKYHARBOR and it sounds just as vitriolic and exciting as it needs to be. The performances are absolutely tremendous – everything is several notches up and the music actually sounds fresh. ‘All Against All’ is a riff-fest from start to finish and fans of old school thrash metal will be all over this. It’s easily one of the mightiest albums to ever come out of this country.