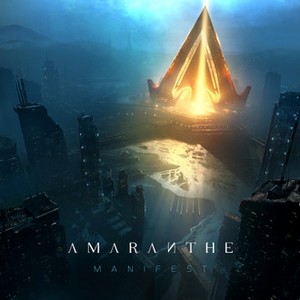 It was a real close one this month, with a few titles like Vanishing Point and Amiensus also vying for some attention, but ultimately Amaranthe’s Manifest won out. A deserving victory, as the band’s one of a kind modern metal approach is displayed in top form with their latest full length. Moving back into some heavier territory, some initial vibes of their debut effort surfacing and combining with their latter day dabbling into more pop and electronic influences. Quite possibly their strongest release to date, Manifest really captures Amaranthe at their most anthemic and iconic, not to mention their most addictively catchy.

An excerpt from Kyle McGinn’s 10/10 review, which posted on September 22nd:

Simply put, Manifest is Amaranthe’s most definitive mark to date. No one can match their futuristic version of modern metal that deftly balances frenetic melodic death riffing and pulsating electronics with soaring melodies to create a sound that’s well, massively addictive. This one should not only bring back some fans that may have jettisoned the act in recent years, but launch them into far greater successes with this razor-sharp approach.