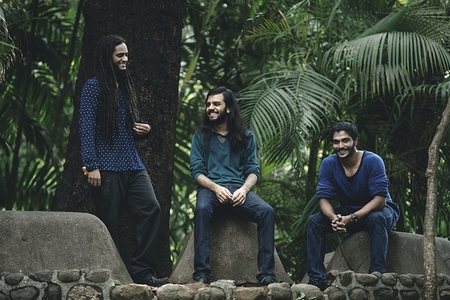 We at DR have the privilege of premiering a new track, “Exultant,” from the upcoming debut of the rising supergroup The Minerva Conduct. Featuring members/ex-members of Demonic Resurrection, Entheos, and Gutslit, the act will be releasing their self-titled album through Transcending Obscurity Records on September 15. If you like what you hear, you can click HERE to pre-order or on the Bandcamp widget below (and hear another track, “Vile”).

Many instrumental groups seem to tip more in favor of either shreddy, explosive material or more atmospheric approaches. The Minerva Conduct seems to try their had at both, with definite success, on “Exultant.” The opening to the track utilizes some catchy and intricate progressive melodies and rhythms to set the stage, and they do a great job of not over-doing it on the musicianship end. You can tell there are some fantastic players involved (as if the names didn’t give it away), and they have truly created a “song” here, instead of simply being showy. Then the track shifts towards the 4-minute mark, diving into more dreamy and atmospheric territory. It slowly builds back up (along with some spoken word sampling in the background) – an equally interesting approach that should come as a nice change of pace and suitably trippy vibe to match the killer artwork.

Says the label:
THE MINERVA CONDUCT are hailed as a supergroup in India with members of DEMONIC RESURRECTION, GUTSLIT and ALBATROSS coming together to create something unique. For too long Indian bands have played well within the confines of the extreme metal genre and what is tried and tested, but finally here is a metal band that’s daring to expand the perception of the genre as a whole. Forward-thinking and cutting-edge, their progressive music deals with clever experimentation and even the incorporation of subtle layers of atmosphere to elevate the experience beyond the ordinary. The more you listen to this album, the more you will get enamored by it. With a gorgeous artwork adorning the instrumental music, and with drumming and synth done by ENTHEOS, ex-ANIMALS AS LEADERS member Navine Koperweis, this is a world class album that should be heard by all fans of contemporary metal music.