Album Stream: Expulser’s The Unholy One 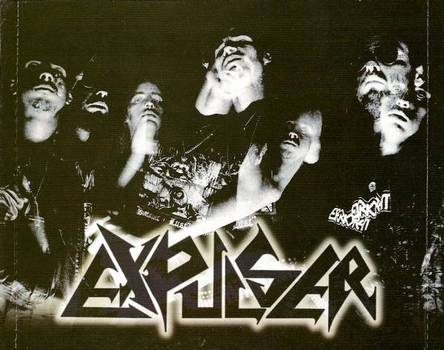 Dead Rhetoric has partnered up with Greyhaze Records to offer a stream of Expulser’s The Unholy One. Originally released over twenty five years ago, it has been unearthed with expanded liner notes, bonus tracks, and extra goodies and will see an official re-release on April 13, 2018. You can find the stream below, and if you enjoy what you hear, click HERE to pre-order a copy for yourself.

Here’s what David E. Gehlke had to say of the album in a recent Rapid Fire column: “Greyhaze continues its never-ending pursuit of reissuing obscure Brazilian metal bands with Expulser. The band’s The Unholy One foray (originally released in 1992 by Cogumelo Records) bears a lot of the hallmarks of that period’s death metal, notably, a ram-shackled production job, flurry of riffs and a tempo that wavers frequently. (No way this was recorded to a click track.) There’s a little bit of sleaze thrown in (‘Cirrhosis (Let’s Get Drunk)),’ but the meat of the album, including ‘Bleeding at Cross’ and ‘Christ’s Saga,’ is pointed slabs of Brazilian death metal.”

Says the label:
Greyhaze Records is proud to announce the reissue of The Unholy One, the debut album by EXPULSER on April 13. Originally released in 1992 by Cogumelo Records, this once rare album is again available on CD, LP and cassette. The Unholy One’s audio has been completely restored and remastered from the original master reels. Visually, the album features restored and expanded artwork including liner notes by founding member Alessandro Lima. The LP version will feature 180-gram vinyl as well as a double insert and poster. The CD version will feature three bonus tracks from the Fornications EP.

A relic from the high time of Brazilian Heavy Metal, EXPULSER’s The Unholy One is one of the last masterworks of the first wave of classic bands from the State of Minas Gerais. Feeding upon the sound of Sarcófago and Sextrash, EXPULSER generated its own breed of noise, eventually finding itself a spot amongst the great names of South American Death and Black. For those into SEX, DRINKS, AND METAL! 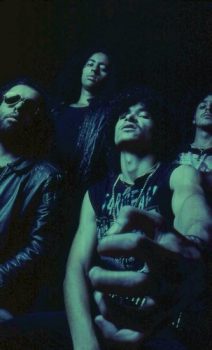 EXPULSER is a Death/Black Metal band started in the small city of Lavras in the countryside of the state of Minas Gerais, Brazil. The band had a short-lived, yet well punctuated career, having released a few demos and two, very notable records: Their debut full-length, The Unholy One and a split EP dubbed Fornications. Despite its quick appearance and disappearance from the Brazilian Metal scene, EXPULSER was able to make a strong and lasting impression with their two outings. Greyhaze Records is now reviving The Unholy One in vinyl, CD, and Cassette formats. EXPULSER should please fans of SARCOFAGO, MYSTIFIER, SEXTRASH, BLACK WITCHERY, BLASPHEMY, and BATHORY.