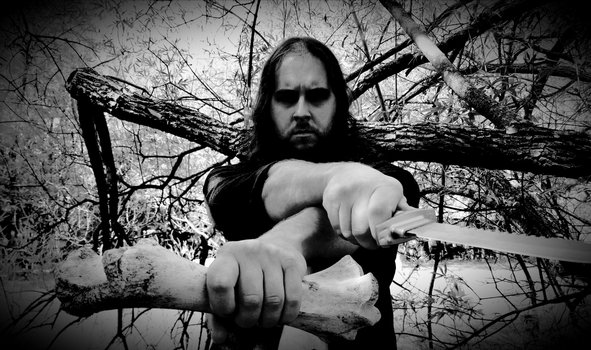 As the week draws towards a close, we at Dead Rhetoric are happy to team up with Sarpa to premiere their upcoming release, Sollivagus. An independent release set to hit the streets next week, specifically June 5, this one man black metal act is definitely not what one tends to imagine when they envision that particular image. If you like what you hear, click on the streaming widget at the bottom of the page to purchase a copy for yourself, or CLICK HERE to visit Sarpa’s Bandcamp page to do the same.

Solivagus is a far more diverse album that you might initially think. While it’s rooted in black metal, there’s a lot of other interesting things going on as the material progresses. Whether it’s a bit of old Opethian progressive vibes, thrash and death metal injections, mellow acoustics moments, or even more surprises – it’s an album that will keep your attention as it meanders around its corners. The sometimes lengthy tracks give it enough breathing space to take the listener on an enjoyable trip, without overdoing it. It’s heavy, playful with some of its proggy melodies (see “Anguishing Reveries”), and is structured in such a way that it pulls you back in to start it over once the album has ended. Add in that it’s all from one individual, and it’s even more impressive.

Says Sarpa’s David Baxter:
Solivagus is an album with 7 chapters from the Wanderer’s journey. Where he travels across different planes of existence melting illusions that lay before him. The energy Sarpa puts into this is meant to fracture the illusions this world throws at us and unchain the hearts of the fireborn! It is a nod to the Ancient Gods and the untainted human spirit. The spirit of the wild. The album was recorded in 2019 at a couple different studios in Central Texas. It was mixed and mastered at Trepan Studios, Virginia.