WHILE HEAVEN WEPT: “Suspended At Aphelion” Due In October

Long-running, and highly respected Virginia epic doom metal crew WHILE HEAVEN WEPT will commemorate their 25th year with the October 27 release of their sixth full-length album, Suspended At Aphelion, via Nuclear Blast. Suspended At Aphelion is undoubtedly the band’s most ambitious, epic, and progressive album so far, featuring a single track divided into 11 parts, performed by the entire Fear Of Infinity lineup as well as several esteemed guests, including FATES WARNING alumni drummer Mark Zonder and co-founding guitarist Victor Arduini — uniting two eras of FATES WARNING for the first time ever.

WHILE HEAVEN WEPT mainman Tom Phillips offered more insight into the album: “While most of our albums have been thematic, this is the first time we’ve released something entirely of a conceptual nature in the grand tradition of PINK FLOYD, GENESIS, RUSH, MARILLION, IRON MAIDEN, KING DIAMOND, QUEENSRŸCHE, and, of course, FATES WARNING…and musically, this album falls somewhere in the middle of all of that with a touch of Viking-era BATHORY as well.” 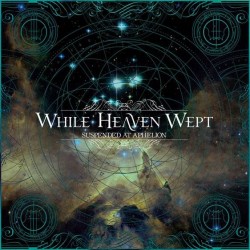