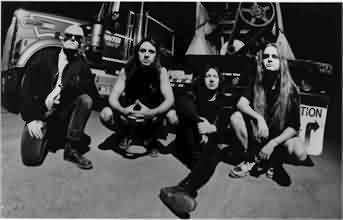 The unofficial number of times Dave Lombardo has been kicked out and/or left Slayer is at three. The first time coming 1987 while on tour in support of Reign in Blood; the second coming in 1992 after Seasons in the Abyss; and the third coming in early 2013 before an Australian run. Obviously, his most recent departure has generated the most interest…blame the internet for that, but it is his first post-Slayer band, Grip Inc. that will get the nod for our Vintage Video pick in the form of 1995’s “Ostracized.”

Grip Inc. was rounded out by noted German producer Waldemar Sorychta, bassist Jason Viebrooks, and vocalist Gus Chambers, who sadly committed suicide in 2008. Their Power of Inner Strength Debut stands as one of the true lost gems of the 90s – a modernized take on the expired thrash sound, albeit with ample amounts of groove and the rather likeable vocals of Chambers, who (sensing a theme here?) is also infinitely underrated. “Ostracized” was the only song from the album to get a video clip, detailing the trials and tribulations of military veterans upon their return home from duty. The message still holds up today, as does Grip Inc.