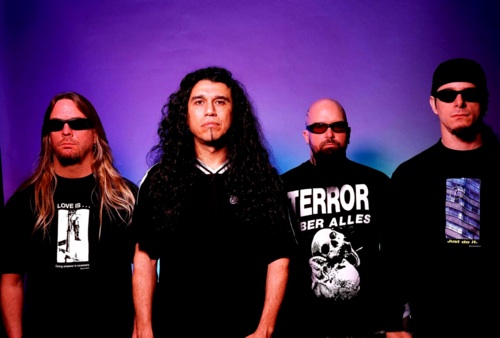 SLAYER played its first show on June 4 since the passing of guitarist Jeff Hanneman and return of drummer Paul Bostaph at the Impact Fest in Warsaw, Poland. Watch fan-filmed video of the performance below.

Almost a week ago, it was announced on May 30 that Bostaph would be behind the drum kit for the first leg of the band’s 2013 international tour which will see the legendary thrash band playing summer festivals and headline shows in Europe and South America. EXODUS’ Gary Holt is continuing to fill in for fallen guitarist Jeff Hanneman, who died on May 2 from alcohol-related cirrhosis of the liver.

Vocalist Tom Araya commented: “Paul’s a great drummer and a good friend, and we’re very happy that he’s decided to rejoin the band. We’re still pretty numb from the loss of Jeff, but we don’t want to disappoint our European and South American fans, and we need to begin moving forward… Having Paul back in the band makes that a whole lot easier.”

Bostaph was SLAYER’s drummer from 1992 until 2001 and recorded four albums with the band — the gold-certified 1994 album Divine Intervention, the 1996 punk covers album Undisputed Attitude, Diabolus In Musica in 1998, 2001 Grammy nominated God Hates Us All, as well as the gold-certified DVD War At The Warfield (2001). In addition to SLAYER, Bostaph has been a member of FORBIDDEN, EXODUS, SYSTEMATIC and TESTAMENT.

Original SLAYER drummer Dave Lombardo sat out the band’s recent Australian tour due to a contract dispute with the other members of the group. Jon Dette (TESTAMENT, ANTHRAX) manned the drum kit in Lombardo’s place.