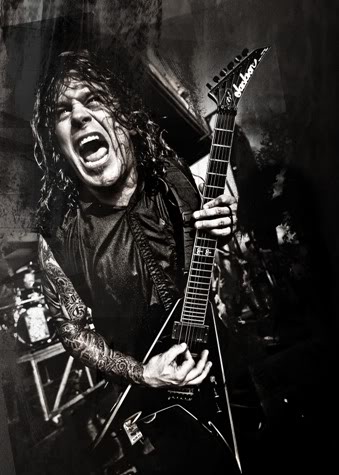 Phil Demmel, guitarist of California metallers MACHINE HEAD was a part of a recent Jackson Guitars sponsored clinic on April 10-13. Video footage of his appearance at the three day clinic, Musikmesse Frankfurt 2013, in Frankfurt, Germany can be viewed below.

Demmel joined MACHINE HEAD a decade after his previous band, VIO-LENCE, broke up; the band that he and Robb Flynn, MACHINE HEAD’s lead vocalist and guitarist, formed together as teenagers. Robb went on to form MACHINE HEAD in 1992 and in 2003, Phil followed suit.

In February, MACHINE HEAD fired bassist Adam Duce. Robb Flynn explained in an online posting: “We may have fired Adam on [February 11], but Adam quit MACHINE HEAD well over a decade ago. He just never bothered to tell anyone… but we all knew it.”  While a replacement bassist has yet to be announced, the band celebrated the tenth anniversary of Demmel becoming an official member of the band last week.