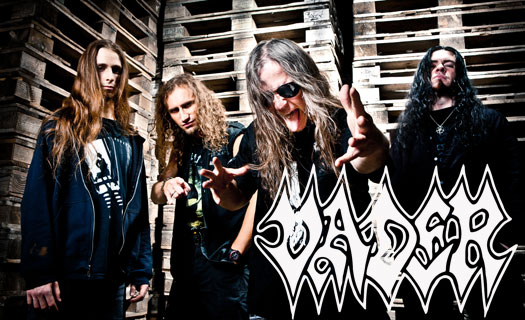 Polish death metallers VADER have booked studio time in November to begin recording their new album which slated for an early 2014 release. Songtitles set to appear on the CD include “Abandon All Hope”, “Bring Them To Me” and “Infernal Poetry.”

VADER frontman Piotr “Peter” Wiwczarek commented: “We are about to finish second part of Back To The Black tour in Europe. Here are a bunch of “Frontline news”. We started this time in North of Europe in Germany and Denmark. On day three we were joined by Friends from MELECHESH, W.I.L.D and STERBHAUS. Then after great show in Aarhus and probably best on tour concert in Nancy in France, we continued through Munich, Zagreb and Budapest to the South. What great shows in Romania and Bulgaria we had!!! Next stops were Serbia, Italy, Switzerland and Annaberg with great performance as well!!! After show in Ostrava (Czech Rep) we parted ways with our dudes from supporting bands to continue alone with the final shows on tour. We’d like to remind you all about Extreme Fest in Hunxe (Germany), where we’ll show up on May 25th sharing the stage with Friends from DECAPITATED, BEHEMOTH and many more bands. Also we plan at the end of August a special show in city of Olsztyn (Poland), where the band was formed. We already booked studio for November/December 2013. A few upcoming titles? Why not!!! ‘Abandon All Hope’, ‘Bring Them To Me’ or ‘Infernal Poetry’. See you soon … in hell.”

VADER’s latest effort, “Welcome To The Morbid Reich“, was released in Europe on August 2011 and in North America in September 2011 through Nuclear Blast Records. Recorded at Hertz Studio in Bialystok, Poland, the album features the cover artwork of Zbigniew Bielak (DESTRÖYER 666, WATAIN) and contains 12 brutal songs which were mixed and mastered in May 2011.