U.D.O., the band fronted by former ACCEPT vocalist Udo Dirkschneider, has posted the cover art for their forthcoming new album, Decadent. The album is due for a January 26 release via AFM Records.

Artwork for the new record is due to be released shortly, but the track listing can be provisionally revealed as;

Decadent will be made available in the following formats: digipak, standard CD, black vinyl, colored vinyl, and as a limited-edition fanbox. 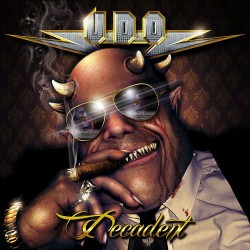