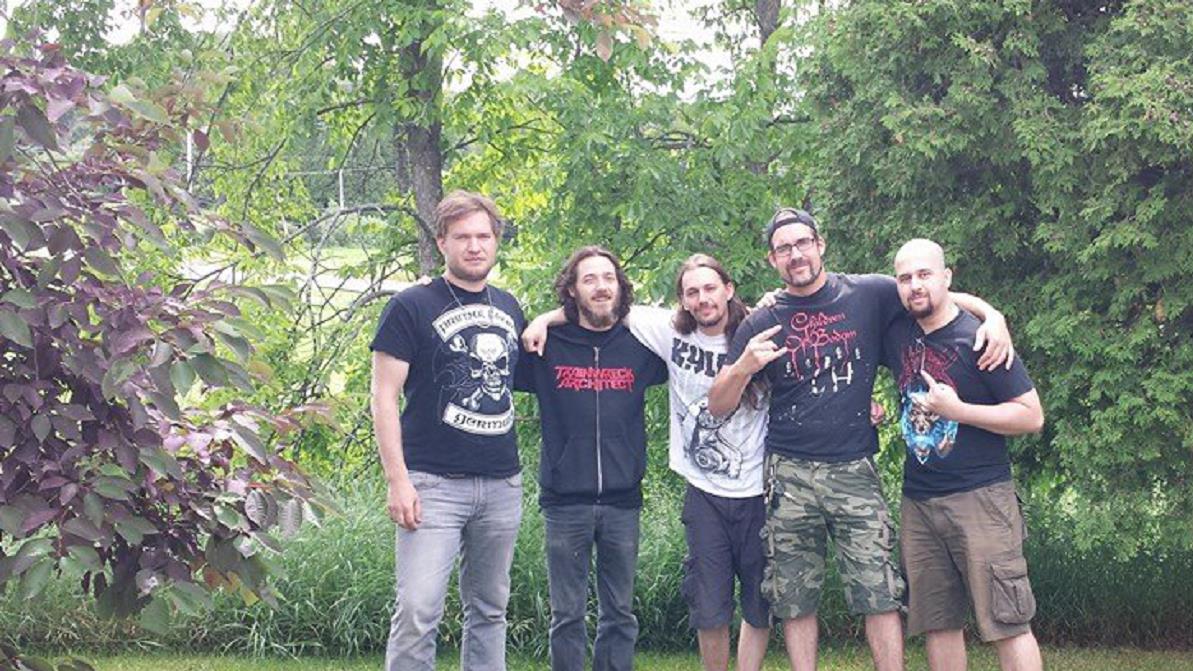 Last weekend was the last date of the Wreck the Road Tour, which occurred in the town of LaBaie in the region of Saguenay. Saguenay is a northern region of the province of Quebec. It is a five-hour drive from Montreal, and two hours past Quebec City. The region has a reputation for its wonderful landscapes, for its ratio of six women for one man, but most importantly, for its wonderful metal scene. The legendary Voivod are from this place!

After spending so much time on the road together during the last two months, the ride was going to be a little long. Ever asked yourself what a metal band does during a six hours ride?

That’s right, we don’t take drugs or write new songs, we just spend our time making sure we are handsome enough to satisfy the legendary six women for one man ratio there is in Saguenay! After being on the road all day, we finally arrived at LaBaie around 6 PM. As Marc-Antoine (drummer) was born in LaBaie, we were hosted by the Blackburn family during this week-end. We really appreciated their hospitality; offering us beer and food. The food was actually so good Eric and Renaud had to sword fight for the last piece of meat!

Then, we went to the Lorrie-Ann, the venue. As this place serves meals until 9P M, the show started quite late. As Saguenay people also have the reputation to be party animals, it did not prevent the crowd to show up in good number. (The proof Saguenay people are party animals: it is the only place where the band can have BIG beer bottles with their beer coupons!)

The first band to play was Wanderlust, a local power metal band. These guys gave an amazing show and we had a good time partying with them after the show! Then, it was our turn to hit the stage. The show went really well, and we had the best sound of the tour at this venue. The crowd reaction was good, especially during the three new songs we played!

Here was the setlist:

As it was the last show of the tour, we had a little extra planned for our fans: We had spent all the remaining tour budget on pyrotechnics! Indeed, we’ve paid thousand of dollars in explosions and fireworks for the last songs. However, as we were playing in a small stage in a small bar, the owner of the place did not agree to let us use those during the show, as he said he did not “Want his bar to burn in flames tabarnac!”

We were quite sad about it, so after the show, we went to Marc’s parent place to party and used all our pyrotechnic equipment to throw the party of our lives in Saguenay!

Here is how it looked:

To conclude, this last adventure in Saguenay was a really cool road trip. We spent some inspiring time in the nature all together and we had an awesome show in front of one of the best metal crowds in Canada! That rumor about the six women for one man ratio in Saguenay was kind of bullshit, but we don’t care. Saguenay was the best show we could have asked for to close the tour! We want to thank everyone who got involved in this show, and on the whole tour!