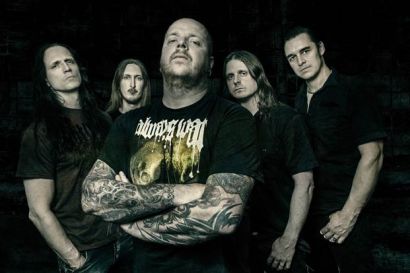 Swedish metallers THE HAUNTED are finally back in the spotlight after almost a year without activity and restructuring behind closed doors, following a major switch of lineups in 2012. But the time has finally come to break the silence and announce the return of THE HAUNTED to form… THE HAUNTED have posted a video featuring a proper introduction to the new lineup which may be watched below.

THE HAUNTED’s founding member and guitarist Patrik Jensen comments: “THE HAUNTED went through some difficult times last year. Losing three band members is a pretty huge blow to any band. Jonas and I agreed immediately that we wanted to continue with the band, but we wanted to take our time and not rush into anything. Meanwhile, news from THE HAUNTED’s camp have been pretty scarce. This changes starting today.

“We’re all VERY excited about having THE HAUNTED back in working shape again and we can’t wait to get back out on the road to play for our very patient and faithful fans again. A new album is also already in the works and if you are familiar with the individual band members of this new lineup, you can be assured that the new material will grab you by the throat from the get-go!

“A huge ‘thanks’ goes out to all the people that responded to our call for new members applications. You put a lot of time and effort into your auditions and we are very grateful to have had such talented and cool people wanting to join the band! We truly appreciated your support!”