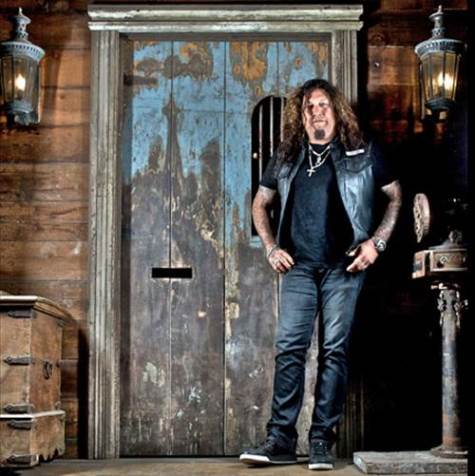 Yesterday, June 6, 2013 saw TESTAMENT frontman Chuck Billy honored on state assembly floor in his home state of California. Billy was honored by assembly member Jim Frazier for the positive influence he has made in the Native American community and on the general public.

On January 14, Billy earned the distinction as the first Native American entertainer to be permanently featured in the memorabilia display at the Hard Rock Hotel And Casino in Albuquerque, New Mexico. Chuck was also among those recognized in the Smithsonian National Museum Of The American Indian’s exhibit Up Where We Belong: Native Musicians in Popular Culture.

“The world of music is inhabited by creative and talented individuals whose work enhances the quality of life for all who are fortunate enough to have entered their sphere of influence,” said Jim Frazier. “Not only does Chuck Billy embody all of these admirable qualities, he also personifies the strength and enduring spirit of Native Americans.”

Billy, a descendent of the Pomo Native Americans, was born in Oakland and spent much of his youth on the Hopland Indian Reservation north of San Francisco. He is best known as the vocalist for TESTAMENT, where he plays several songs, including “Trail of Tears”, “Allegiance” and “Native Blood”, in honor of his ancestral lineage.

TESTAMENT recently took home the award for “Best Music Video” at the American Indian Film Festival for their clip for the track “Native Blood”. The video was filmed at the Hopland Indian Reservation in Hopland, California. The clip was directed by Mike Sloat (MACHINE HEAD, STAIND).