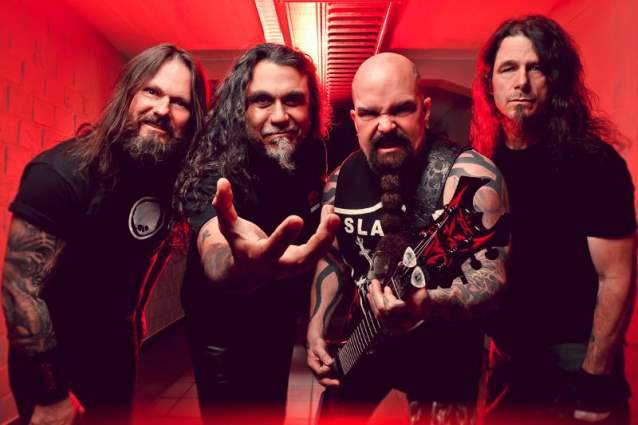 Legendary thrashers SLAYER are currently streaming “When The Stillness Comes. The song, accompanied by a live recording of “Black Magic”, from the band’s 1983 album Show No Mercy and recorded live at the 2014 Wacken Open Air festival, will be made available as part of Record Store Day on April 18. It will be released as a limited-edition (only 5000 copies worldwide), seven-inch vinyl picture disc exclusively at all participating independent record stores worldwide.

SLAYER recently completed work on its new CD with producer Terry Date, who previously worked with the band on “Implode”, a song that was made available as a free download following SLAYER’s surprise performance at last year’s Revolver Golden Gods awards in Los Angeles.

Other songtitles set to appear on the new SLAYER album — tentatively due in August — include “Atrocity Vendor” (which previously came out as the B-side to the “World Painted Blood” seven-inch), “Take Control”, “You Against You”, “Chasing Death”, “Cast The First Stone”, “Pride” (working title) and “Vices” (working title).

Joining Kerry King and bassist/vocalist Tom Araya during the sessions for SLAYER’s new album are returning drummer Paul Bostaph, who replaced Dave Lombardo in 2013, and guitarist Gary Holt (also of EXODUS), who has been filling in for Jeff Hanneman on tour for the past four years.