Reunited New York death metallers SKINLESS have posted the video for “Skinless,” which comes from their new album, Only The Ruthless Remain, which will be unleashed on CD, LP and digitally via Relapse on June 2 in North America.

The sadistic, seven-minute “Skinless” clip begins innocently enough before surging throat first into a horrific world of lethal injections, human flaying and general group-inflicted suffering as part of “some sort of Satanic cult ritual”. A delightful exercise in Skinless’ signature brand of butchering riffs and surgical precision, “Skinless” is punishing both sonically and visually.

Elaborates vocalist Sherwood Webber, “The “Skinless” video chronicles the sordid obsession of our accomplice, the Hudson Skinner. Captured by an equally ruthless Jim Brassard and his team, have a look into the sickened world of the Hudson Skinner set to song by your fiends in Skinless.” 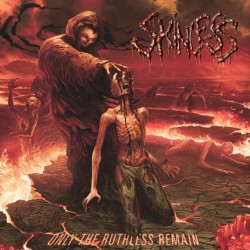