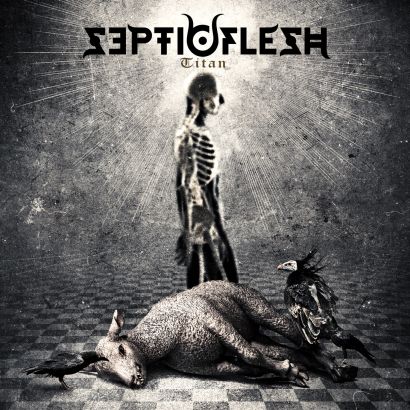 Greece’s SEPTICFLESH will release their new full-length album, Titan, on June 24th via Season Of Mist. The first single, Order Of Dracul is now available via iTunes and Amazon MP3, and can be streamed below.

The band says, “Order Of Dracul” is the first taste of the new album. It is a bombastic song with colorful classical orchestration. The title refers to Vlad Tepes, the notorious prince of Wallachia.”

In addition to the new music, Septicflesh have also revealed the cover artwork for Titan, completed by vocalist/bassist Seth Siro Anton.

The album – the band’s Prosthetic Records debut – is currently available for pre-order in the following formats:

The new album will consist of ten songs that were recorded once again at Devasoundz Studios in Athens, Greece and in the Czech Republic with the collaboration of the Prague Philharmonic Orchestra and Choir. From there, the album was mixed and mastered in Los Angeles by acclaimed producer Logan Mader (GOJIRA, FEAR FACTORY, CAVALERA CONSPIRACY).