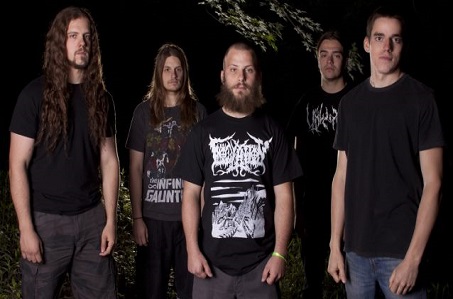 RIVERS OF NIHIL have announced a handful of dates leading up to the Best In Brutality Tour with BROKEN HOPE, OCEANO, FALLUJAH, and KUBLAI KHAN. Rivers Of Nihil will begin this new campaign in support of The Conscious Seed of Light in Fayetteville, NC on March 10th and perform at SXSW in Austin, TX on March 13th before beginning the Best in Brutality Tour on March 18th in Phoenix, AZ. The tour ends on April 19th in Columbus, OH and includes an appearance at the New England Metal and Hardcore Fest in Worcester, MA.

RIVERS OF NIHIL has also announced that drummer Ron Nelson has parted ways with the band. The band has issued a statement and has confirmed Nelson’s replacement: “After five years as RIVERS OF NIHIL we have come to the mutual decision to part ways with our drummer and friend Ron Nelson. Ron is the guy who started this band back in 2009 and most of us have been playing in bands with him since we were sixteen years old. He recorded two EPs and a full length with us, toured all over the country, farted many times in our van, and has left an enormous space to be occupied. Without Ron we absolutely would not be the band (or people) that we are today. Ron will be sorely missed by us and we wish him the best in his future endeavors!

“With the departure of such a monster of a player as Ron we knew that we had to carefully select our newest member; that guy is Alan Balamut. Alan has learned our live set in record time and with frightening accuracy. We are proud to have him as part of the RIVERS OF NIHIL family and we look forward to the times ahead. Catch Alan and the rest of us on tour this March and April with Broken Hope, Oceano, Fallujah, and Kublai Kahn on the Best of Brutality tour!”