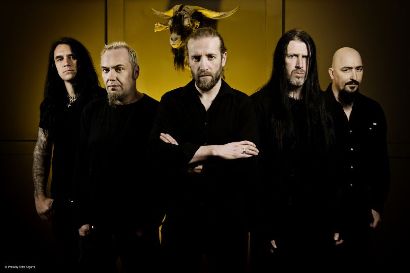 States vocalist Nick Holmes: “Over the past 25 years we have written a shit load of songs, we often get told we didn’t play your favourite song live, so here’s your chance! Tell us the tracks you would most like to hear played live at the 25th Anniversary shows, and the ones with the most votes will make it into our live set.”

With a career dating back to 1988, and their official recording debut in 1990 (Lost Paradise), Paradise Lost has been riding a rollercoaster of highs and lows.

Guitarist Aaron Aedy remembers the early days: “I remember our first rehearsal at Studio X in the Dean Clough complex of Halifax, it was Saturday March 26th between the hours of one and four pm. We had a few ideas flying around and managed to write our first opus ‘Blood-filled-eyes’ and start our 2nd ‘Plains of Desolation’, I can only describe these songs as unique. Afterwards we all went to the pub after to celebrate. Three and a half months later we were playing live, supporting Acid Reign and Re-Animator at the legendary Frog and Toad Night Club in Bradford. We had a 30 minute slot and only 15 minutes of music so we played one song twice, attempted a Sodom cover we hadn’t even learned and Nick [Holmes, vocals] did his stand up for the rest of it.”

Now it’s time to celebrate 25 years of glamour and gloom with four anniversary shows in October to which the band have invited their friends LACUNA COIL. Another, very special guest, will be announced shortly for those dates.