October 2014 Album of the Month: At the Gates’ At War With Reality 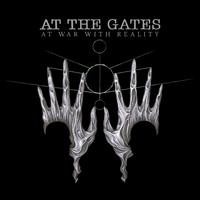 Narrowing the selections for a month as jam packed with excellent material was tough. We could easily go on for two paragraphs just listing out fantastic (and ‘big name’) releases that saw the light of day in October. But it comes as little surprise that our winner is that of At the Gates. Easily one of the most anticipated albums of the year, At the Gates’ return after an almost twenty year absence does not disappoint. Perhaps it won’t go on to influence thousands upon thousands of bands of the next generation, but the insanely challenging task of following up Slaughter of the Soul has been highly successful. Drifting further towards melancholy, At War With Reality is not simply Slaughter Part II, and now the table has been set, so to speak, with At the Gates now free to creatively explore their future.

It’s not a Carcass situation where they had Swansong to work off of; Slaughter of the Soul is one of the most superior albums of its kind, so daunting the band broke up in part because of the firm belief they’d never be able to top it. And yeah, At War With Reality doesn’t better Slaughter of the Soul, but, it’s a more mature album, and gives ATG some wings to move forward. (David E. Gehlke)

At War With Reality probably won’t leave the same lasting legacy of its predecessor, but then again, few albums will. What At the Gates has done is to preserve their legacy and expanded outwards. It would have been all too easy to produce a Slaughter part II and would have undoubtedly left a stain on their discography. It’s great to see that the creative wheels are still turning so efficiently after such an absence; At the Gates is back, and the world is better off for it. (Kyle McGinn)

I doubt anyone in 2014 can create that metal classic that will be used as a blueprint for the next generation – but At War with Reality doesn’t tarnish the legacy, so as such it will be a frequent player and debated record to the good. (Matt Coe)