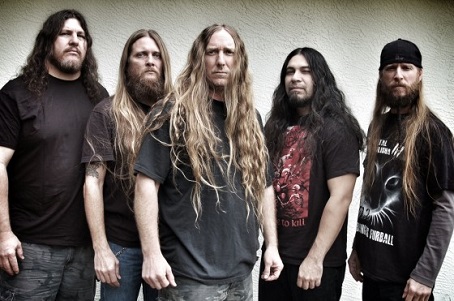 Tampa death metal icons OBITUARY will bring their brutal wares to the stage this Fall on a short series of live assaults. The tour begins with a pair of back-to-back shows at Brooklyn, New York’s Saint Vitus Bar on October 9 and 10, before flattening nine more venues through October 20. Having been holed-up in their own Redneck Studios the last few weeks penning the follow-up to 2009’s punishing Darkest Day full-length (2009), the shows serve as a temporary writing break.

Elaborates drummer Donald Tardy: “We have been busting our asses in the studio, having a blast and writing new material. Twelve songs are done and ready to be recorded but we want a monster album for our fans so we are working on a few more to make this record huge! We will continue writing until October when we will take a break from the studio and new music and go destroy the Trois-Rivieres Metalfest with Hatebreed and crush the US.”