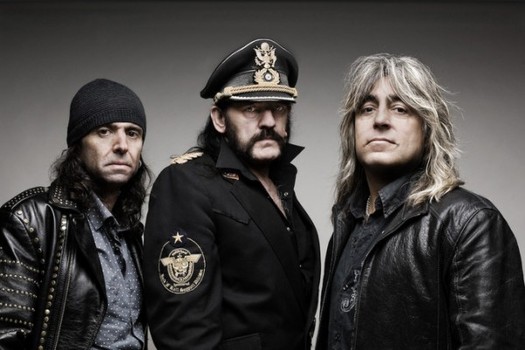 “If we moved in next door, your lawn would die!” So said Ian ‘Lemmy’ Kilmister to a reporter back in 1975, when MOTORHEAD had just formed. And the band look forward to their 40th Anniversary year in 2015, they can reflect on thousands of scorched gardens, over 30 million albums and millions of concert tickets sold, plus their fourth Grammy nomination, in the 2015 ceremony’s “Best Metal Performance” category for “Heartbreaker”, a track from one of their best-selling records ever, Aftershock. It offers the band a chance to pick up their second Grammy Award, having won the same category in 2005. Not a bad start to the year’s forthcoming festivities!

Those festivities will include the band coming together in Los Angeles this January to commence work on their 22nd studio album with Cameron Webb once again at the production helm, and an already sold-out series of tour dates which promise to see MOTORHEAD not just enjoying familiar turf but striding proudly into new pastures. In support of the new record, the band will headline tours at summer festivals in Europe beginning in late May through August, and then a US tour from late August through September, ending with their second annual MOTORHEAD Cruise. Then it’s back to Europe in late November through December for their traditional winter headline run.

Yes, what a difference a year makes. Last February, Lemmy was slowly recovering from some major health upheavals, but starting with the monumental April 2014 Coachella appearances, he has swiftly bolstered his health and proceeded to lead the band through their most successful summer and winter of live dates yet, with record attendances in Germany and the street reverberating with the word that the boys were not just back in town, they were destroying lawns, houses, and entire blocks as they delivered some of the strongest Motörsets in years.

On November 12th, MOTORHEAD performed at the Mitsubishi Electric Halle in Düsseldorf, Germany. The show was filmed for the famed Rockpalast program on the WDR network. The entire concert will air on December 15th and be made available online shortly thereafter.