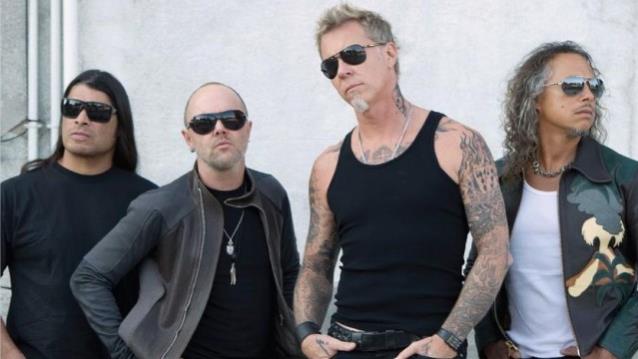 METALLICA’s nine-minute medley of four tracks, titled “Ronnie Rising Medley”, that the group culled from the iconic metal singer’s mid-Seventies band RAINBOW, is available for streaming using the SoundCloud widget below (courtesy of RollingStone.com). The medley is featured on This Is Your Life, the tribute to album to Ronnie James Dio, which will be released on April 1 via Rhino.

“[Dio’s] music is so much a part of what’s in METALLICA’s DNA, the harder, edgier, blues-based hard rock from the Seventies,” METALLICA drummer Lars Ulrich tells RollingStone.com. “It was fairly effortless to put this together, because it’s something that we were all reared on. I don’t recall sitting there in a band meeting or anything deciding what to play. Somebody starts playing ‘Stargazer’ — which is sort of just like something that’s in our arsenal to jam — and then that whole period there, ‘Tarot Woman’, ‘Kill The King’, ‘A Light In The Black’ — that’s just really effortless to jump into.”