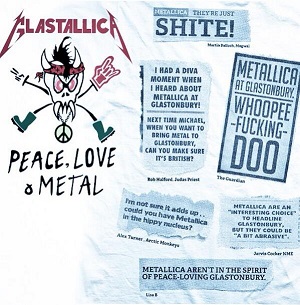 In spite of weeks of controversy, METALLICA were able to play the U.K.’s famed Glastonbury festival today, June 28. The band closed the show, which also included ARCADE FIRE and KASBIANS.

The band also released a special t-shirt, which features the word “GLASSTALLICA” at the top written in the classic METALLICA logo font along with the message “Peace, Love & Metal” at the bottom. Quotes on the back of the shirt range from Alex Turner of the ARCTIC MONKEYS saying “I’m not sure it adds up… Could you have METALLICA in the hippy nucleus?” to British web site The Guardian’s headline of “METALLICA at Glastonbury. Whoopee-fucking-doo.” Also included is a seemingly out-of-place quote from JUDAS PRIEST singer Rob Halford, who said, “I had a diva moment when I heard about METALLICA at Glastonbury. Next time, Michael [Eavis, Glastonbury organizer], when you want to bring metal to Glastonbury, can you make sure it’s British?”