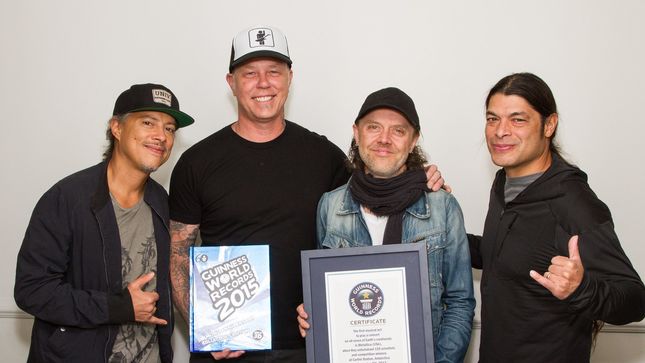 It was recently announced that according to Billboard, METALLICA are among the new additions to the Guinness Book of World Records’ new edition that will be out next week.

METALLICA’s achievement comes for being the first and only band to ever perform a concert on all seven of Earth’s continents, and did so in a single year, following its its “Freeze ‘Em All” show show in Antarctica last December.

The band has issued the following statement regarding the honour:

“Last year as we hit the road, like we do most years, visiting a lot of our favorite places along with some new ones, we didn’t realize that we were on track to break a world record! Good thing someone else was paying attention as we managed to play on all seven continents in one year, becoming the first and only band to ever do so!. Our friends at Guinness World Records took notice bestowing on us the distinct honor of being featured in their official book hitting stores September 10th.

In addition to performing live in North America, South America, Europe, Asia, Australia, and Africa, the year was capped off with a visit to Antarctica on December 8, 2013 to play for 120 scientists, contest winners and their penguin friends at the Argentine Carlini Station. We were literally at the bottom of the earth for one of the most unique, special and unforgettable days in our 30+ years as a band and low and behold, our little adventure sealed the deal for the record! Who woulda thought…”