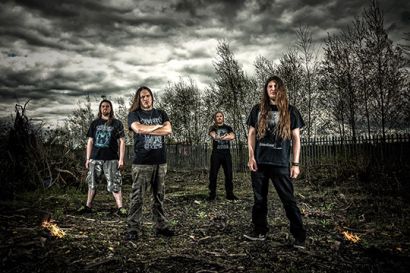 UK-based thrashers MERCILESS TERROR will release their full-length debut, Vile Extinction, on October 7th via Devil’s Clause Records. The album comes on the heels of last year’s self-released EP, Eternal Decay, and sees the band overcome a series of obstacles in the form of lineup changes.

Earlier this year, Michael Brush (ex-HELLBASTARD) stepped in to take over drum duties and original guitarist David Siddons took his leave and was recently replaced by shredder Luke Tasker.

Frontman Dale Linsdell commented, “‘It has been tough this past year, with new line up changes/touring and recording the album itself, we are glad to finally unleash it upon the world. This will be 11 tracks of pure terror.”

Vile Extinction was recorded at Stuck On A Name Studios by co-producer Ian Boult and was mixed and mastered by Neil Williams at Abysmal Audio. The album artwork was handled by legendary artist Jon Zig and the bands logo was revamped by local artist Gary Ronaldson of Bite Radius Designs. 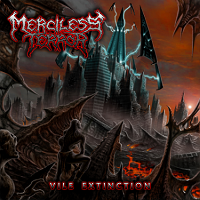