Comments LOST SOCIETY mastermind Samy Elbanna: “We were totally blown away with the sketch we got, and even more so when we got the final artwork!!
“The cover really fits the theme of the album as it has a more dark feel to it and it’s brutal as fuck! The dude holding the bloody machete is definitely terror hungry!

“Jan did an awesome job; this cover is sick!”

Adds Meininghaus: “I was asked to do LOST SOCIETY’s new album cover and first of all I had to face the fact that I had to follow their debut album’s art that was created by the legendary Ed Repka. One of the true heros of my own thrash-metal days. So I decided to go a different way and create the band’s cover idea in a much darker and less cartoony mood than the debut’s.

“LOST SOCIETY’s musical style and their approach to metal is very ’80s Bay Area to me, so I thought it might be fun to paint something that might have been on one of those record covers these days.

“I listened to LOST SOCIETY and my old EXODUS, TESTAMENT and FORBIDDEN vinyls and it was a blast to come up with Terror Hungry artwork!”

Mastermind Samy Elbanna commented: “LOST SOCIETY is back, and we’re angrier than ever! The new album Terror Hungry is a full on thrash album from start to finish, with a darker and even more aggressive feel to it! It has the signature elements of that make up LOST SOCIETY, and we’ve put in more groove riffage, more mind blistering guitar shredding and some of the fastest stuff we’ve ever done! Look out, this ones gonna be FASTER, LOUDER and we’re more pissed off than ever!!” 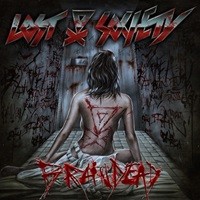 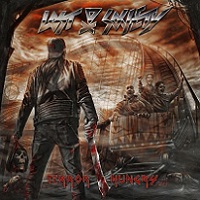