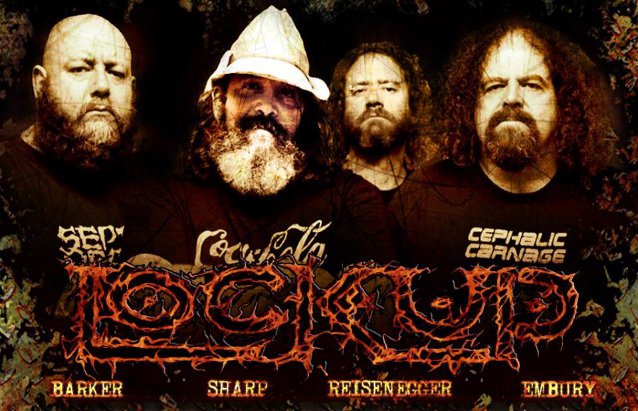 Grindcore supergroup LOCK UP – featuring Anton Reisenegger (PENTAGRAM, CRIMINAL), Shane Embury (NAPALM DEATH, BRUJERIA, VENOMOUS CONCEPT) and Nick Barker (CRADLE OF FILTH, DIMMU BORGIR) — has released the following statement:
“Unfortunately, we have to announce the departure of our brother and longtime vocalist Tomas Lindberg (AT THE GATES, DISFEAR).For the record, there’s absolutely no bad blood or drama involved and we wish Tompa nothing but the best in all his future endeavours.

“As you all know, AT THE GATES have just released a brand new, killer album, and the subsequent touring schedule that will follow means Tompa simply won’t have any free time to commit to LOCK UP’s imminent future plans of recording a new album or any live performances that will follow.So please welcome our good friend and partner in grind, Mr. Kevin Sharp of BRUTAL TRUTH into the ranks of the band as our new full-time vocalist.

“Kevin made his debut live appearance with LOCK UP at Manizales Grita Rock festival in Colombia back in early October with only 10 days notice to learn 22 songs.This is a very exciting and brand new chapter for the band as we prepare to enter the studio in the coming months to record our follow-up album to ‘Necropolis Transparent’, which came out on Nuclear Blast Records back in 2011.

“The band is currently busy in writing mode and currently seeking a new label home and hope for an early summer release of the as-yet-untitled new album.”

Said Lindberg in a statement “I sadly had to part ways with.my good ol’ grind buddies in LOCK UP. This is all due to time/schedule/logistic issues. The new AT THE GATES record needs/deserves its time, and I don’t want to leave my brothers from downtown hades hanging. In a dream world I could do both, but it would be egoistic of me to hang on to it — and constantly having to say no to stuff because I wasn’t available. Luckily, a mutual grind bear buddy, Mr. Kevin Sharp, was able to step in. He will be a perfect replacement. He has the heart, the passion and the voice. He has also been a friend of everybody in the band for as long as I can remember.

“I will miss the music, the brotherhood, the fans and the good times. But I think that this decision is for the best of the band, and that is what matters.”

Added Sharp: “Having already toured with LOCK UP several times, it feels very natural jamming with them. When we played the gig in Colombia last month… if I wore shoes, I’m sure they would have been very comfortable.

“Barker is an absolute pleasure to follow — hits like an asshole on fire. Anton’s tones and riffage are simply metallic and classic. And Shane and myself — well, we’ve done VENOMOUS CONCEPT for over 10 years now — I know how the man is wired.

“I’m super stoked to see the variables put together… This is gonna be ridiculously heavy. Nothing but but huge grind gratitude for Tompa and his work in the band… It’s pretty cool tearing apart his phrasing and lyrical style. Never too old to learn new things about what you can do with your voice and dissecting his approach is an honor. Uber-grind salutations to his reboot of both DISFEAR and AT THE GATES. Two of my favorites. I look forward to crossing paths with them in the future…Let’s kill it…”