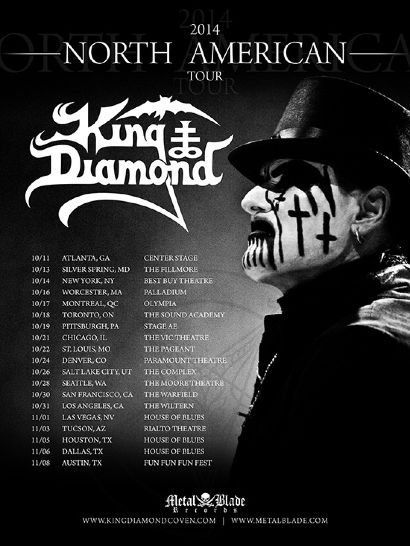 King Diamond welcomes Jess And The Ancient Ones as the opening act for their North American tour this fall. The occult rock group from Kuopio, Finland, was personally selected by King Diamond himself to be the openers on the tour.

Jess And The Ancient Ones is an occult rock band from Kuopio, Finland. This seven-headed entity was given birth by Thomas Corpse and Thomas Fiend, its purpose being the exploration of magical realms beyond the mundane. The band’s lyrical concept is based upon the personal occult experiences of the writers, which combined with music, creates a strong mystical atmosphere. With the vocal talent Jess as their frontwoman and three guitars in the lineup, JATAO draw inspiration from heavy metal and rock groups of the classic era, such as Mercyful Fate, Roky Erickson, Iron Maiden and Abba.

In other news, the Atlanta, New York, Chicago, San Francisco, and Los Angeles shows on the tour are sold out. Additionally, only a handful of tickets remain for the Seattle, WA date. Get your tickets now before they are gone.