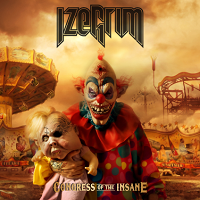 Dutch thrashers IZEGRIM have released the video for “Relics of the Past,” a song from their 2013 album, Congress Of The Insane. The album was recorded at Soundlodge Studio in Germany (GOD DETHRONED, DEW-SCENTED, SINISTER), and features cover artwork from Mariano Villalba.

Says the band: “No scripts, no cheezy choreography, no old deserted factory hall. This is IZEGRIM in it’s natural habitat: on stage supported by our loyal fans. Thanks for all the support in 2013, it was an awesome year for us!”