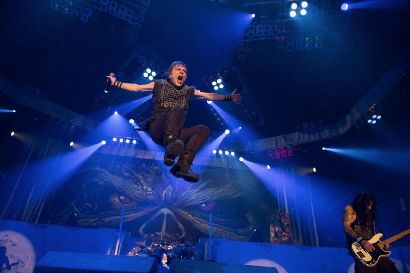 According to NME, IRON MAIDEN singer Bruce Dickinson has denied receiving a $500 million (£316 million) contract from the US military to manufacture drones.

The claim had been made on the blog Dorset Eye in a post titled: ‘Bruce Dickinson: Rock’n’Roll Warmonger’, which took as its source an announcement on a South African conference speakers’ website.

In a written statement to NME, a spokesperson for the band described the article as “spurious” and said: “This is a totally inaccurate and malicious piece of writing that seems to have stemmed from an unfortunate mistake in terminology on a South African website that the writer of said blog has since used as a starting point and catalyst to go off on a flight of sheer fantasy.”

They clarified: “Both Bruce Dickinson and Iron Maiden’s manager Rod Smallwood were early investors in, and remain great supporters of, Hybrid Air Vehicles (HAV), a company that has nothing whatsoever to do with drones, ‘lighter than air’ or otherwise!”