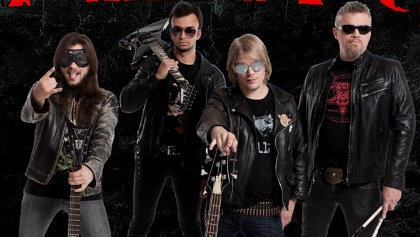 Stockholm, Sweden-based old school metallers INFLIKTED have inked a deal with Wormholedeath for the release of their self-titled debut album. The album was recorded at Realsound studio with producer Whaoomi Corvi and will be made available via Aural Music

According to a press release, Inflikted includes “10 tracks of insane old-school metal in the vein of ENTOMBED, MOTÖRHEAD, VENOM and KREATOR, and sounds like a northern storm with its huge production and powerful sound!… With titles like ‘Corporate Slut’, ‘Inferno’, ‘Truckdriver’s Journey’ and ‘Wrath Of The North’, the band makes things clear on the topics developed and explored with the lyrics.”

Said INFLIKTED in a statement: “We are glad to have been picked up by the label WormHoleDeath with their help we will now spread our old-school type of metal to the world! Like an iron fist to the corporate sluts faces, our music will destroy! Fast, over-driven and raw! With the help from the guys at Realsound studio they managed to get the music just the way we wanted it. Imagine MOTÖRHEAD’s sound with PANTERA’s production and you will get the idea. This record will be a face-melting experience. We are extremely happy to be part of the WormHoleDeath family, what a band roster! Holy Divers!”

Wormholedeath’s Worm added: “When I decided to sign INFLIKTED, it was because they lived in a big city’s suburb, like me, and their music is somehow like the soundtrack of my youth! When I listened to the album, the only word I said was: Fucking hell!!! I am so proud of what we have been able to do together and the great thing is that we just started. These guys work really hard and I am sure that they will be very good messengers spreading the old-school metal and their nasty topics! INFLIKTED are ready to blow you all away! Respect for the Swedish mafia!!!”