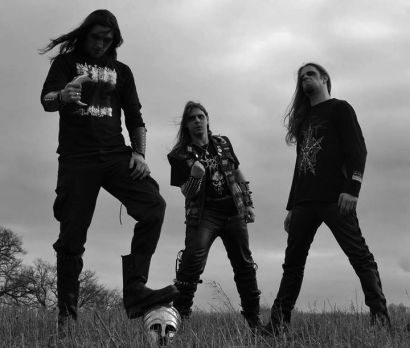 Extremists SCYTHIAN have signed a two-album deal with Hells Headbangers. SCYTHIAN are currently hard at work on their label debut (and second LP overall), to be recorded in November at Priory Studios in Birmingham with Esoteric’s Greg Chandler, whose past clients include Grave Miasma, Adorior, and Indesinence, among others. The band will commission macabre Czech artist Blanka Dvorak to do the cover.

Scythian are the first UK extreme metal band to sign with HELLS HEADBANGERS, who were duly impressed with the band’s stalwart, idiosyncratic take on extreme metal art. At once savage and aristocratic, SCYTHIAN’s forthcoming second album will establish the band as a force of British individualism and take their existing sound on a darker, more dystopian journey. The album is as yet untitled, but a teaser video can be heard/seen below.

A statement from the band reads: “After ten years of fighting tooth and nail, we’ve finally come out on top. Times have been hard, but they’ve bred a new kind of band – one that will follow its ambitions to the ends of the earth. We are immensely proud to announce our pact with HELLS HEADBANGERS. This is a historic day for us and for the resurgent UK scene. Scythian is a metaphor for the unorthodox, relentless, and unfashionable sounds of London. Though the trends of the last ten years have always stood against us, we have endured and prospered. Let this album be our revenge on the mediocre and self-indulgent work of our times. Many bands talk of being individual, of ‘having their own sound.’ We have never known anything but our own path. The coming album will establish Scythian as a strong and independent force.”

SCYTHIAN appeared on the world stage in 2007, with an explosive demo called Suffering To The Conquered. The band’s debut album, To Those Who Stand Against Us… was released via Cypriot label Necroterror Records in 2009 and was recorded by Leon Macey (Mithras).
Joined by Alexandros (Macabre Omen/The One), the band released a split 7″ with Greek black metal titans Kawir titled Grunwald / Titanomachia in 2011. It was released by Anastasis Valtsanis (Dead Congregation) on his label Nuclear Winter.

SCYTHIAN has returned to its original lineup as a trio: vocalist/bassist S. Vrath, guitarist A. Von Moller, and drummer J.C. Volgard. B.Iron (Monumentomb, ex-Spearhead) will join the band for live performances.