I will usually have a good mix of cool new stuff and old classics that I will have in my slaylist. I consider myself lucky as I’m able to receive some cool stuff as far as new music/releases go AND I work at a Bar/Bistro that I’m able to blast whatever the fuck I want at since I manage the back food prep/storage area, mostly away from the customers! YAY!

As far as just what has been on my slaylist…… Let’s take a look at “THE PILE” of the recently slayed.

I have been raging the Miserycore Get Total Apart EP. These maniacs are from Chile and this one is 4 songs of pure black/thrash mayhem that has some punk/crossover style attitude to it. It rages and rips. One of the best bands of this genre and VERY underrated!

The self titled Lurker of Chalice album from back in the mid 2000s is one I have been blasting. Such a fucked up and weird twist on black metal. Wrest has been in a bunch of bands, but I feel LOC is his best!!!!!!! Everything from the atmosphere to the lyrics on this are fucked. And that’s a good thing to me! haha.

Excoriate’s demos have been on the slaylist recently. Horrible Death 2003, … from Morbid Ruins 2004 and Poisoned by Darkness 2006. I was in contact with their singer Stefan for a while back in the mid 2000s and he was nice enough to send me those, I still blast those tapes! Excoriate rules, putrid German death metal in the 80s style.

Local Los Angeles black metal band Icon of Phobos (pictured) has some new stuff coming out and guitarist AA sent me a track recently entitled “Ashen Crowns” that will be on their next full length album (coming out hopefully in August!) It’s a continuation of their awesome black metal assault. Their 2011 self titled debut album still gets many spins at Casa De Abominator.

Absconder from Illinois has been slaughtering my ears with their 2011 demo and their killer split with Japan’s mighty Anatomia. This is some bulldozer heavy, stenchy death metal sickness in the way of fellow Illinois maniacs Cianide (who are ALWAYS in my slaylist with ALL of their classics!!!!!)

My buddy Charlie Infection was nice enough to send me his sick new project called Goat Felch. It’s a total black/death/thrash/grinding/dooming extraveganza. It’s what you would come to expect from this maniac. And bottom line it rules!!!!!!!!!!! TOTAL FUCKING DEATH NOISE ETERNAL!!!!!!!!!!!!!!

The dark grindcore masters in Bloody Phoenix have unleashed their 3rd full length masterpiece entitled Ode to Death. It rules! This is the same dismal and heavy ass grinding terror that would have fit so nicely on Earache Records back in 1988. It’s got a punk edge to it, like Hellnation gone heavy, just as their other stuff has. But it’s still heavy and blasting as all fuck. Metalheads will love it too!!!!!!! One of the BEST bands around today! In ANY genre.

Speaking of grind, local Los Angeles legends Excruciating Terror are back in action after a few amazing live shows here in the area and in some near by fests in other areas. They have been laying waste to everything at those shows. There will be a new full length and some re-releases of older material, splits upcoming to look out for.

Gravehill’s latest album, Death Curse, will be released on April 1st via Dark Descent Records. For more information on the band, head over to their Facebook page. 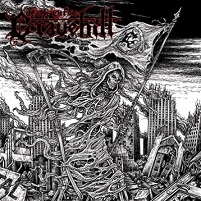