Swedish progressive death metallers GRANDEXIT have posted the video for “Judgment of the Wicked,” a song off their forthcoming The Dead Justifies the Means album, which is slated for a July 8th (Europe) / July 23rd (North America) release via Germany’s Lifeforce Records. The video can be streamed below.

The Dead Justifies the Means was produced by David Castillo at Ghostward Studios (KATATONIA, BLOODBATH) and features “a mix of vibrant death metal and progressive rock,” according to a press release. “Think MASTODON meets THE BLACK DAHLIA MURDER, or DISMEMBER meets SYSTEM OF A DOWN.”

GRANDEXIT will support DECREPIT BIRTH and JUNGLE ROT in August and will be also taking part in the Scandinavian Aggression tour in September. 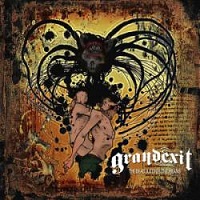