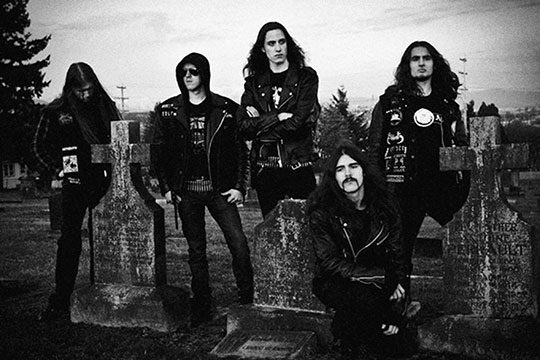 Shadow Kingdom Records head honcho Tim McGrogran had this to say about the debut: “Epic doom metal is not the most well-known heavy metal genre. It takes a lot of heart and guts to play this style of music since the dinosaurs that started this kind of music are some of the very best bands to ever exist.

“Epic doom metal, in our opinion, started in Sweden with CANDLEMASS. Their intention was to write the first epic doom metal album. Other doom metal bands floating around back then weren’t thinking about writing a doom record, they just wrote the music they liked and that sounded heavy.

“With that said, we’re proud to introduce FUNERAL CIRCLE! Hailing from the icy mountains of Canada, this young and hungry band is writing some of the very best epic doom metal songs heard today.

“If you’re looking for epic doom metal, there’s not much out there better than this self-titled beast of an album! They’re slowly clawing their way to the top of this genre. This record is loud, heavy, and raw with outstanding vocals. To top it off, if the fans voted on best album artwork, this would be the best of 2013.”