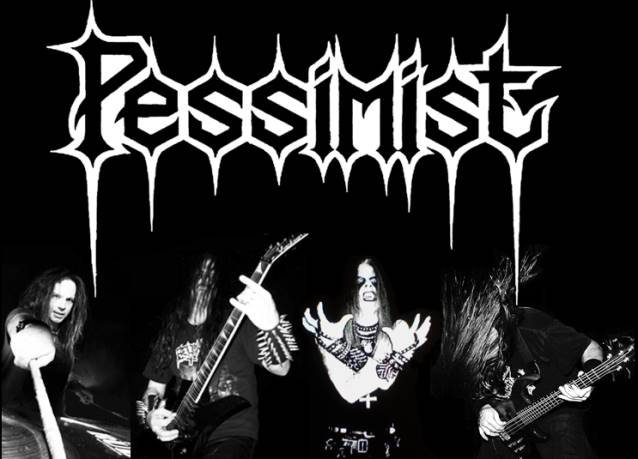 “We are excited to have Kelly (Conlon) onboard with us once again.. Kelly most recently toured with us during our East Coast US dates in 2008, including New England Deathfest, Hostile City Deathfest, and European Tour in 2009.

“I toured with Paul (Collier) while playing in ANGELCORPSE on the Lightning Death Descends West Coast tour in 2008. Paul is a world-class drummer and we are excited to incorporate his playing style into the PESSIMIST sound.”

“Also returning to the PESSIMIST lineup is guitarist William Hayden, from our ‘Slaughtering The Faithful’ CD — and we will be joined by a new vocalist, Ivan ‘The Evil One’ of BLACK MASS.”

PESSIMIST released three CDs on Lost Disciple Records: Cult Of The Initiated (1997); Blood For The Gods (1999); and Slaughtering The Faithful (2001), which was produced by Erik Rutan (MORBID ANGEL, HATE ETERNAL, CANNIBAL CORPSE). PESSIMIST’s latest CD, “Evolution Unto Evil”, came out in 2009 on Pathos Productions/Deathgasm Records, and features previously unreleased demo tracks as well as tributes to DEATH, KREATOR, POSSESSED and MEGADETH.

PESSIMIST is currently recording demo tracks for a new full-length album, tentatively titled “Keys To The Underworld”. The effort will be released online through iTunes and Amazon.com, and there are plans for a limited-edition CD release.