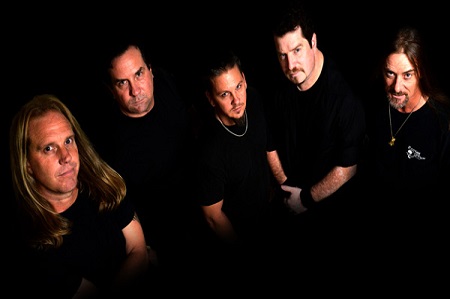 Arizona thrash forerunners FLOTSAM AND JETSAM have announced plans to launch their own Pledge Music Campaign to fund the re-recording of their seminal debut, No Place For Disgrace. Here’s an update from the band:

“You asked for it, No Place For Disgrace 2014 re-recorded with fresh tracks. All ten classic songs, in your face! In a period of rising metal bands in 1988, Flotsam And Jetsam’s second release effort No Place For Disgrace emerged on the metal scene. A highly anticipated follow up to the classic Doomsday For The Deceiver album, NPFD was destined to sit alongside its predecessor on the shelf of the two highly reviewed albums deemed as classics in the band s repertoire.

Classic indeed considered among many thrash fans or that era and this present era. Many fans recently have been hearing classic recording from bands of that era being remixed or re-mastered to keep in synchronization with the audio quality and technology of today’s era.

It is of great pleasure to be able to introduce and invite new generations and old, not a remix or a re-master but a full reproduction recording of this classic recording in its entirety that feature the original lineup of the band after Jason Newsted’s departure.

Eric AK, Michael Gilbert, Kelly David Smith, Edward Carlson and Michael Spencer begin the journey with you, the PledgeMusic members, to give you previews of all stages of the classic remake.”

For more information on the band’s campaign, click here.