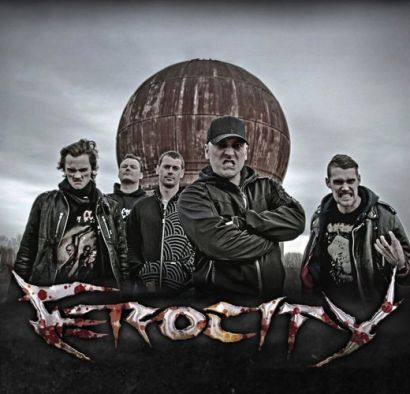 Instead of just listing great bands like Suffocation, Morbid Angel, Carcass, Bloodbath and Nile – which all members of our band listen to and enjoy greatly – I want to highlight some of the lesser obvious but just as great acts out there.

The first album that comes to mind is the amazing 2012 release by Cattle Decapitation, The Monolith of Inhumanity. When I put this album on for the first time my immediate impression of it was “chaotic.” After the second time in my record player I started noticing the very melodic details this album has to offer and which really makes this release stand out from the other good releases out there; Travis Ryan is an incredibly versatile singer and the combination of his agonizing screaming, brutal growling and the very melodic and catchy choruses on practically all the songs is a rare acquaintance in extreme metal.

Besides the mindblowing vocals, Ryan has also written some of the most heartfelt and intelligent lyrics that I have come upon in this genre of metal. I won’t exemplify his lyrics here but I can really only recommend reading the lyrics for the tracks ”Your Disposal,” ”The Monolith” and ”Kingdom of Tyrants.” Or even better: go to YouTube and find the extremely thorough fan made analysis of their mindblowing ”Kingdom of Tyrants” video. I was blown away after watching it for the first time and it’s brilliance still manage to amaze me!

Another release that have also spent a lot of time in my record player is the 2013 release Requiem For Us All by Italy’s The Modern Age Slavery. They manage to spice up their brutal death metal with a lot of melodic elements and combined with touch of deathcore the whole album consists of some very well written songs. And exactly the melodic parts add a very atmospheric feeling to the album, and even though The Modern Age Slavery are using a lot of elements that remind me of bands like Whitechapel, they still manage to get away with it. On my account, Requiem For Us All stands out as one of the best metal releases in 2013 and is definitely worth more attention than it received so far. I mean, just listen to a track like ”Ivory Cage” and try not to bang your head…it cannot be done.

Other bands that is currently on my playlist and thereby deserve a mention is British death metal mastodons Dyscarnate and our Danish labelmates, Corpus Mortale.

Ferocity’s new album The Sovereign was released in July via Deepsend Records. Additional information on the band can be found at this location.